Veteran in Hospice Care Honored with Shadowbox of Accomplishments 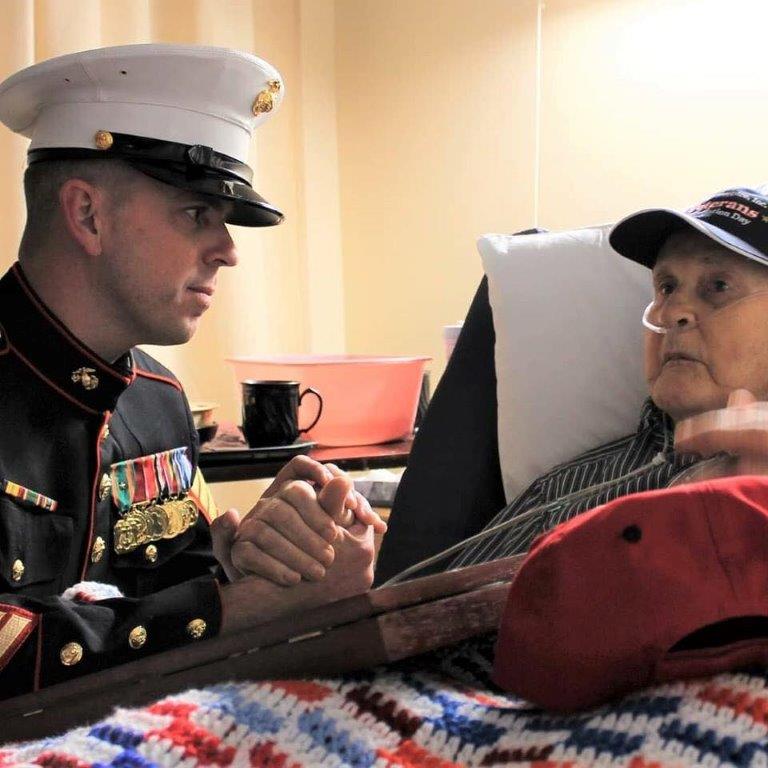 “Buddy! Where have you been?” Lucian Tillett lights up as Mark Smith walks into his room at his local nursing and rehabilitation facility. Smith, a social work student at Heritage Hospice, Inc. who served for eight years as a staff sergeant in the US Marine Corps, has created a special bond with Tillett, a hospice patient, over their years of military experience. Tillett was a corporal who served as an enlisted Army medic during combat operations in the World War II Liberation of Germany. As a result of his bravery—the former corporeal conducted lifesaving procedures while in engaged with the enemy in three battles—Tillett received several medals and awards throughout his military career.

Smith’s visit to Tillett on October 30, 2018 was a special one to commemorate Tillett’s many achievements. His small room was overflowing with family, his hospice team, and Smith, who came dressed for the occasion in full dress uniform. Smith had the privilege of presenting Tillett with a shadowbox featuring his various medals, awards, and even a picture of Tillett from his time in the service. “I sure do thank you,” Tillett said. “I always wanted one.” Alongside Smith, Tillett’s grandsons helped get the medals and pins to complete the shadowbox.

Nestled inside his box, Tillett reviewed the accolades of his past. A good conduct medal; a World War II Victory Medal; a World War II lapel pin for honorable discharge (ruptured duck); European, African, and Middle Eastern campaign medals; and an Army Combat Service ID Badge from the CSIB 2nd Infantry Division. Smith said of Tillett, “he exhibits a humble and courageous outlook on his service, fighting bravely to save his fellow soldiers in combat operations.” Without the help of “Outside the Walls,” a charity Smith is affiliated with, and the volunteer department at Heritage Hospice, Inc. who generously provided the funds to purchase the medals, Tillett would not have received this special gift.

As things begin to wind down in Tillett’s room, he has one request of those gathered with him, that they join him in prayer. As everyone joins hands and surrounds this humble man, it’s easy to see how deeply he appreciates not only his new shadowbox, but being surrounded by so many people who have gathered to lift him up. Heritage Hospice, Inc. is honored to serve veterans like Lucian Tillett. It is a privilege to work with men and women like Tillett who have sacrificed so much and fought so bravely for this country. Though Tillett was gifted with an irreplaceable present, the true gift is serving patients like him.

Heritage Hospice, Inc. is seeking a full time Director of Financial Services. This position is responsible for, including but not limited to, managing and oversight of the financial activities…